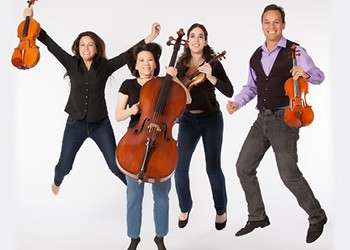 Along with local favorite Jeff Midkiff, the RSO is proud to present one of the most unique and sought-after chamber ensembles on the concert stage today. The Carpe Diem String Quartet is a boundary-breaking ensemble that has earned widespread critical and audience acclaim for its innovative programming and electrifying performances. Through performances that reflect its passions for gypsy, tango, folk, pop, rock, and jazz-inspired music alongside the traditional string quartet repertoire, Carpe Diem has defied easy classification while quickly becoming one of America’s premier string quartets.

Jeff Midkiff, a native Roanoker, is a master musician, educator, and composer. He has performed internationally with the Lonesome River Band and his solo CD “Partners In Time” has received critical acclaim. Jeff’s Concerto for Mandolin and Orchestra, “From the Blue Ridge,” was composed for the RSO and performed with Rochester Philharmonic, Jacksonville Symphony, and Knoxville Symphony to name a few. Jeff is an Orchestra Director with the Roanoke City Schools and received the 2017 Yale Distinguished Music Educator award.